I had the pleasure of visiting Rae and Steves’ lush property at Samford (Qld/Aus). Rae is a bit of a character and rocked this blue jacket-net-hat combination while we did the split. Rae had two colonies of Carbonaria with one box dieing out a while ago. The old box looked like it could have had pests in at one stage but was now full of ants. The second colony looked busy with bee traffic and was heavy so it looked good. After finding a spare empty box we thought we’d open up the good colony for a look.

After the disappointment of losing one hive, i think the enthusiasm was restored when seeing how healthy the good hive was. 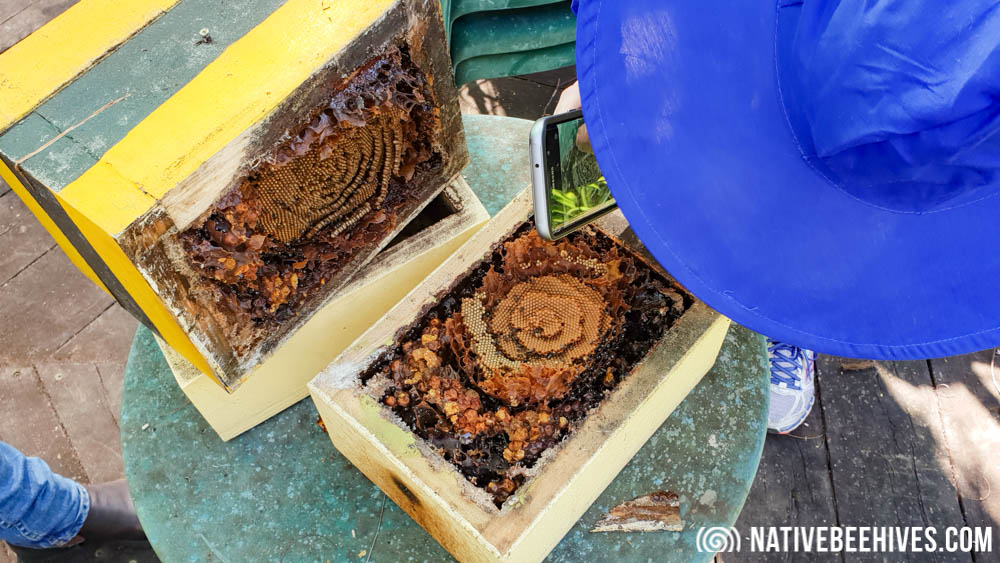 The hive opened in the perfect spot right in the middle with the advancing front on display. The colony had plenty of pollen stores in the bottom box though we didn’t see many honey pots so we assumed the honey super has good amounts of honey as the box was quite heavy. 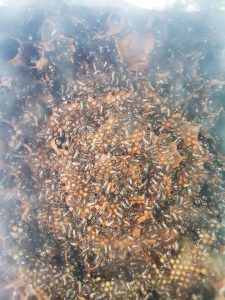 Photo looking through the viewing window the next morning. If you monitor the brood, you could look for open brood cells being prepared by workers then the Queen might make a brief appearance laying an egg in the cell. If she fertilisers the egg it will become a female bee, if she doesn’t fertilise it, it will become a male. 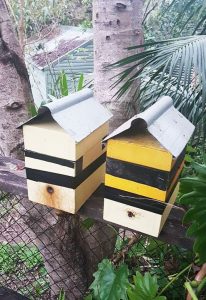 The boxes were placed beside each other and Rae added some roofs later.  The boxes can stay in this position or one could be moved later. Rae is keen to build the bee population and will be monitoring the bees progress with a view to do some more splits and have a few colonies around the yard. It can be good insurance to have a few hives in your yard because if you only have one and lose it, it can be devastating.

We did a good job of taping the joins as the boxes didn’t have a perfect fit..

Tip: If you open a hive and aren’t happy with how it looks you can just put it back together as you don’t really need to split a colony if you don’t want to.

Update 31/01/2019 –  Three months from the split. The tape has been removed allowing access to the top honey super section. Both hives are looking healthy and have been very busy

Article and 3 photos by Steve – nativebeehives.com
3 photos supplied by Rae