Steve Maginnity was the guest speaker at the August 5 meeting. He was running late as he put trust in his Google navigator and ended up visiting a Goat farm in Cleveland on the way, so a couple of other club members jumped in to fill the gap while waiting for Steve to arrive. 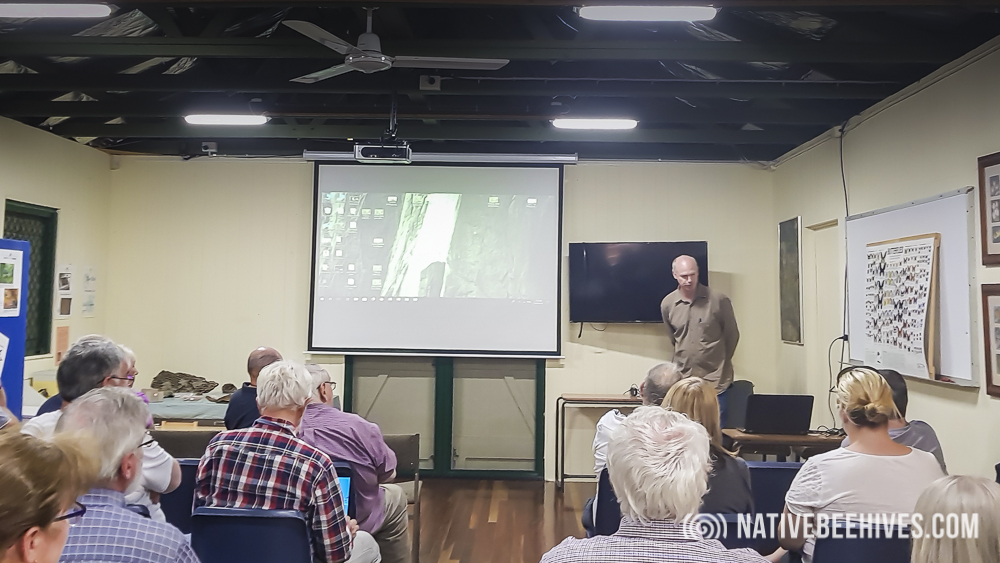 Dean talked about the recent happenings at the Native Bee Conference with a bit of open discussion about the distance drones can travel, a recorded 10 kms. 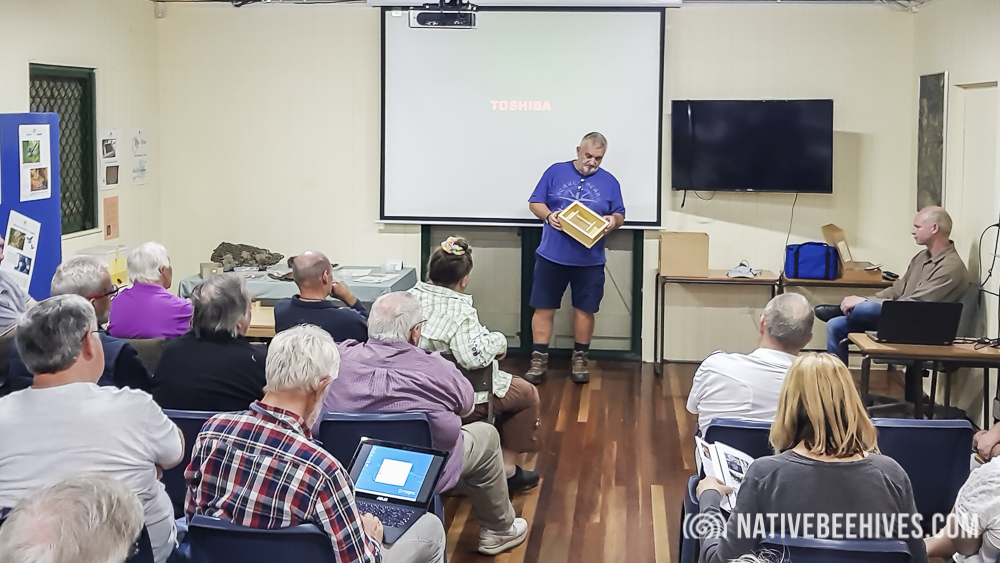 Tony Goodrich is one of the biggest hive sellers in Australia and did a quick presentation talking about the evolving design of his PVC boxes and condensation in boxes in general. Moisture or condensation is noticeable when the bees spit out excess moisture around the outside of the entrance or front of the box leaving a messy stain. This can be noticed in many box designs, including boxes made from timber and is more likely in Winter with the colder air temps. Tony has made changes to his boxes over the years, adding a block of timber in the bottom box with a large hole in the plastic bottom board. The timber allows the box to breathe more. Tony is very open about the construction details of his boxes and is happy to share information.  There may be more changes to his design as it evolves, as all box makers constantly make adjustments to their designs. 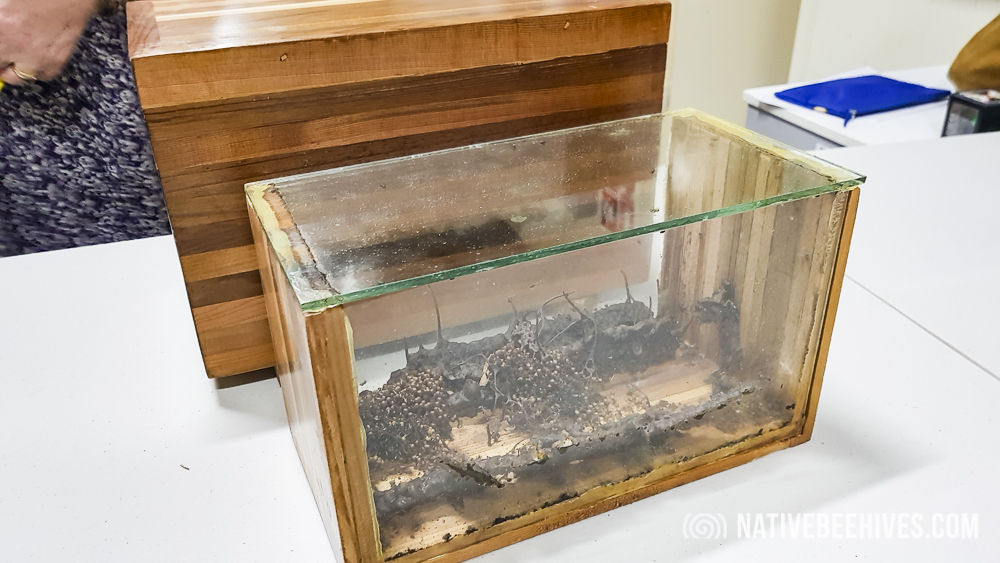 Dean Haley also brought along a Micro colony of Stingless Bees that everyone could view. This is a small fish tank styled box so you can watch the bees progress. More can be seen about this micro colony on one of Nicks videos. (click here to see the Micro colony video) 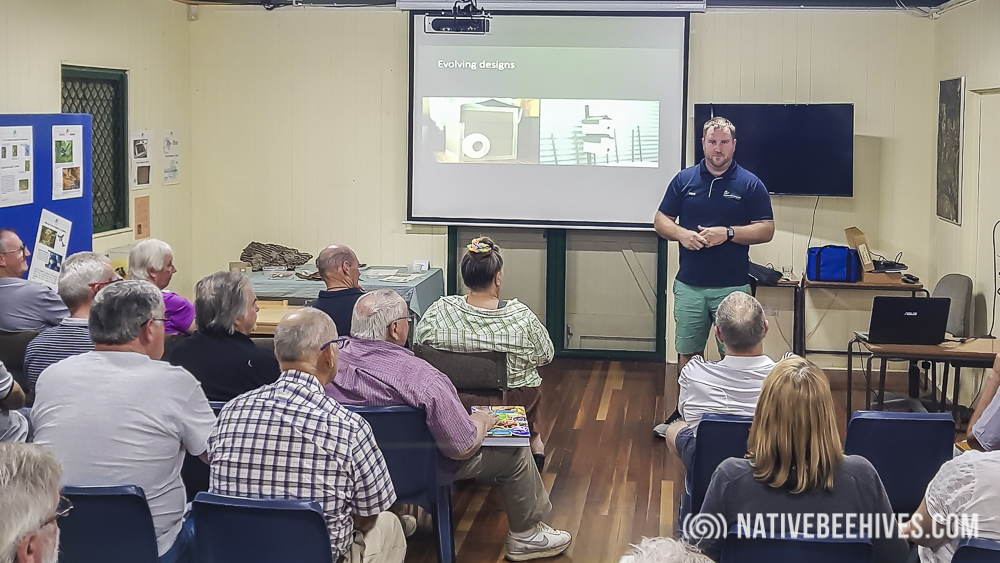 Steve Maginnity arrived just in time with tales of his Goat farm visit.and talked about how he became involved with Native Bees and his passion for the field and his small business.

Steve comes from a family of teachers and his first job as an Agricultural teacher saw him try to introduce different programs in to his school. First attempting to start a European Honey Bee program which was quickly knocked on the head by the principal for the risk associated with children with bee sting allergies (Anaphylaxis). He then investigated Native Stingless Bees and was able to start a program at his school with approval.

Steve became more and more interested in Native Bees and decided to start a small business and told his Dad he was now in the business too and he should start making boxes. His goals for his business are: “Educate, Pollinate, sell hives and Native Bee conservation.” 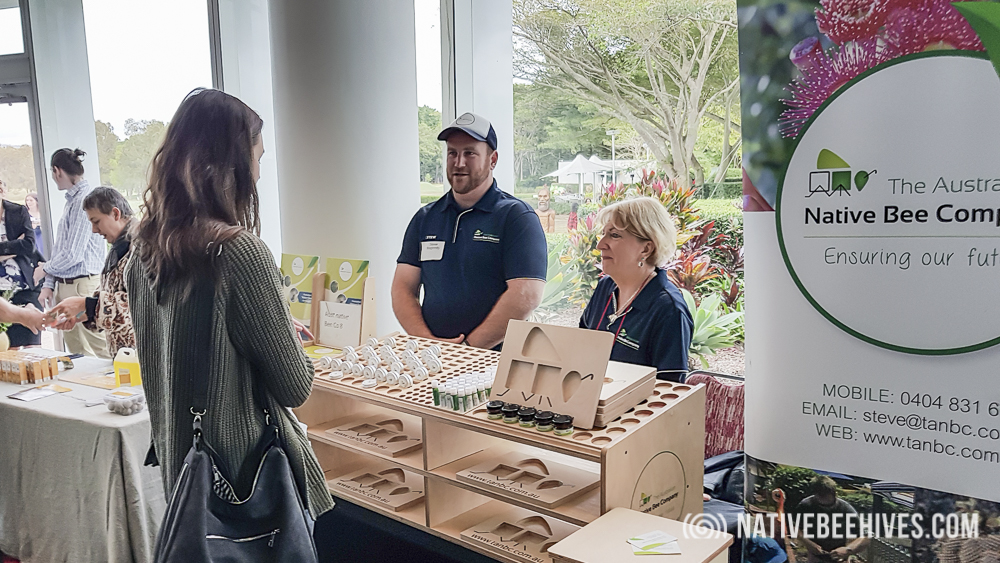 Above: At the recent Native Bee Conference

His business now has 650 boxes stocked with Stingless Native Bees (Tetragonula Carbonaria) which he regularly places on Macadamia farms to assist with pollination. Some issues with Macadamia farms is the insecticide sprays they use so the hives have to be removed before spraying then replaced after. The hives are only in place for the flowering period, July to October. It’s thought that 5 hives per hectare is an ideal ratio for best pollination but some use 3 hives per hectare.

Steve also went on to tell us about his adventures to Brazil where he joined Giorgio (club member) in doing some work with Stingless Bees, once trying to deliver some hives to a farmers property and being shot at by the farmer because he was mistaken for a threatening gang member… and his involvement with the highway roadworks project near Coffs Harbour with trying to rescue Stingless Bee hives from the clearing sites, which he said was quite frustrating trying to coordinate successfully. (maybe the less i repeat here the safer)
Embarassing tips from Steve Maginnity:
Steve’s business is The Australian Native Bee Company – https://tanbc.com.au